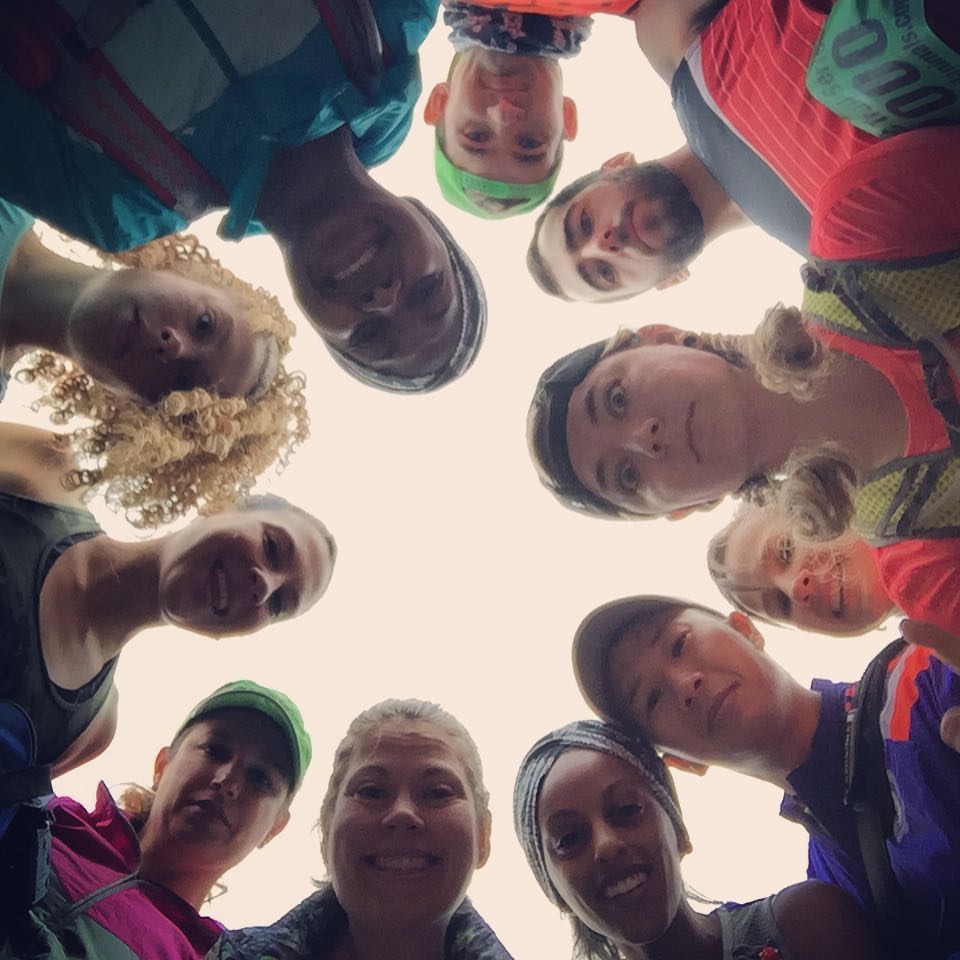 I think the Spring Classic was my 4th TARC event, and each one is better than the last. What more can be said about the events TARC organizes? Low key, high energy, and extremely supportive are just a few of the great things that come to mind about their races. Seriously, I am so lucky to have them as my local trail running group and can’t wait to run, volunteer, cheer at more of their races. Even with the wet weather, volunteers were cheery and people were excited to run. The Spring Classic is fun because of the huge range of events that happen simultaneously. I was running the half marathon, but there were races ranging from 10K to 50K. The looped course meant everything was commingled, which meant I was never running alone.

I got to the start right when the mandatory race meeting was ending (oops). I picked up my bib, got set, and looked around to see who else was running. Colleen was supposed to be there, but a last minute foot-issue meant she was taking an unplanned rest day. I knew a few November Project people who were hitting the trails, but I absolutely did not expect to see 10+ people out to run or just feed off the event’s energy. It was great to see so many familiar faces to help me get excited. A friend was visiting over the weekend, so I may have had a slight hangover at the start of the race and anything to get my energy up was necessary.

This half was my last long-run before the Bear Mountain 50 miler. I was using it as a test drive, wearing all the gear I plan to rock next weekend. By the end, I was happy with everything, but I hope it is dry on race day. In terms of goals, I didn’t have any. My friend Steve asked what I was aiming for when the gun went off, but I had no answer. Hangover + week out from a 50 miler = just wanting to get the race done. Either way, it was a race so I knew I couldn’t just take it easy. In the back of my mind, top 10 seemed reasonable.

Like I mentioned before, the runners for all the different events are mixed together on the trails. The course is a 10K loop, with some minor add-ons for the half and full marathons. In terms of keeping the race interesting, its great, but it does make it hard to know who you are really competing against. By the time the crowd thinned out a bit, I really had no idea what position I was in so my impromptu goal became pretty meaningless. The course itself is one of my favorites. It is an awesome mix of single track and fast fire road with some rolling hills that just makes for incredibly fun running. Also, TARC manages to make some of the most intricate courses that constantly twist and turn, making for a hugely engaging run.

So, the gun went off, we ran the half marathon add-on, and by the time I started on the loop itself I had no idea what position I was in. Steve and I were neck and neck and settled into a comfortable pace. Since there is no add on for the 50K runners, we spent the first few miles passing people sharing encouragement along the way. Since I ran the 50K last year, I had a pretty good memory of the course which helped pace myself a bit. My stomach felt pretty awful at the start, so I was really hesitant to push and have the potential to blow up. I kept calm and just enjoyed the run. The weather said there was a minor chance of rain and it was cool and muggy. I quickly warmed up and did my best to take frequent sips of Tailwind. Originally I wanted to run without a bottle the first lap, but since this was a test run of everything for Bear Mountain, I decided to carry it the entire time.

By mile 4 or 5, my stomach started to settle and I saw some runners who I knew were running the half so I decided to push. Given the unreliability of a GPS watch in the woods, I don’t know my exact pace but I picked it up to about 80% perceived effort. I put a bit of ground between Steve right before getting to the most technical section of the course. I love technical trail running, but being so close to my spring goal race made me a bit hesitant from fear of injury so I was running a bit timid. To compensate, I tried to push hard on any fire road. Towards the end of lap 1, the rain started to come down hard which I was happy for since I was getting hot. Running anything longer than the half I would’ve been pissed because for the most part raining=chafing.

I finished lap 1 30-40 seconds back from two other half marathon runners. Since I had my bottle and gu on me, I didn’t need to stop at the aid station and I began to dig a little deeper to try and catch the two runners. Given the curvy nature of the course, I would catch glimpses of my competitors in the distance, but I couldn’t tell how far they really were. Was it right in front of me or did I have a major turn or two before I was on the same part of the trail they were? Honestly, it made for a fun race because it became less about my overall goal and more about running each step strategically. I passed one runner about 2 miles in and did my best to remain consistent. When I passed the second runner, I did my best to surge and put some ground between us. However, this was right before a technical section of trail that he blew past me on. My heart sank as I thought that I would have no way to regain the ground given my strategy, but I held on and put distance between us on the fire roads, by the end leading by just 20 seconds. I finished in 1:43 and change, good enough for 7th place. Arbitrary goal achieved!

I really had an awesome time running the TARC spring classic. It had been a while since I have run anything shorter than an ultra, so running something that didn’t take 5+ hours was really invigorating. Honestly, had I not been hungover I think sub-1:40 would have been achievable, but given the proximity to Bear Mountain it is probably best I spared my legs some abuse. Besides keeping me moving the first 5 miles, Steve had an awesome race for a 9th place finish just 3 minutes after I came through. Every other November Project runner had an amazing day. I think the best part about trail running is the lack of seriousness. Sure, people have goals but everyone just looks like they are having a blast.