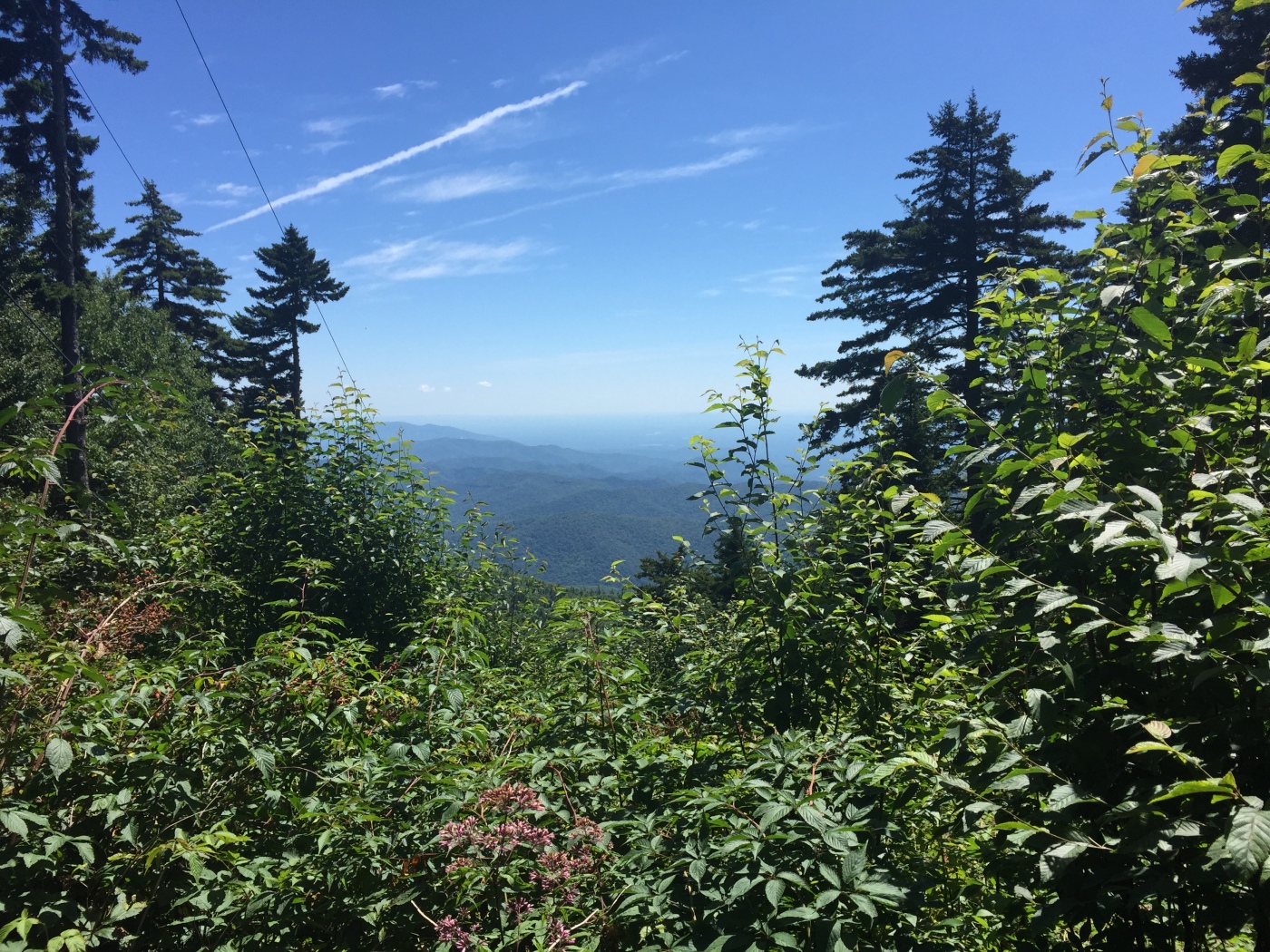 Western North Carolina may be the perfect place to trail run. Tall peaks, jungle-like forests, and more beer to drink post run than I can even comprehend. The last weekend in July makes three trips down to Asheville to visit friends that I have been fortunate enough to make in the past few months, and every single one of them has been better than the last. This time, I specifically wanted to get in some training to help me prepare for my extremely hilly ultras coming up. The Rut has 10,000 feet of vertical over 50K, so I needed to give my legs a beating.

Being in Western North Carolina, finding big hills was not a problem. But I decided why not start on the absolute biggest hill – Mount Mitchell. Mount Mitchell is 6,648 feet high and is the tallest place east of the Mississippi. That is all I needed to know about it to decide I wanted to run up it. So, without much planning or thought, I told Colleen we were going to head to Black Mountain Camp. From there, we were taking the Mount Mitchell trail all the way to the peak. This lack of planning meant two things:

For such a dream-run, the lack of thought I put into the day really became quite a bummer. Colleen and I left the car in the late morning from the campground and were immediately granted with steep climbs that we needed to power hike. The hill was unrelenting the entire run (which makes sense since it is only five miles from the valley to the summit). About a mile and a half in the trail splits. The left fork adds about a quarter mile to the trail and so called “scenic views” while the right fork is the actual Mount Mitchell trail. We decided to take the more direct route to preserve as much energy we could during the climb. After the trails met again, we decided it would not be smart for Colleen to continue up to the top. What I did not think about was what kind of day Colleen would have after we split up.

I continued upward for another 2 miles or so before I came to another fork. The Mount Mitchell trail was nowhere to be seen, and in my lack of planning I forgot to grab a map. I decided to head right (which I later learned was the wrong direction). After a quarter mile or so my phone buzzed and flashed the words HELP and COME DOWN NOW from Colleen. Without a second thought I was whizzing back down the trail as fast as I could. The adrenaline made running down the technical trail a breeze, but at the same time I had to keep it calm to make sure I didn’t injure myself making my way back to Colleen. Colleen had taken the scenic route back down the trail, so I followed in her foot steps and added a quarter mile of descent. As it turns out, the scenic route was not at all scenic. After 45 minutes or so of flying down the mountain, I found Colleen about 15 feet up a tree. As it turns out, she encountered 2 bear cubs. I was so proud that she kept her wits about her and handled the situation as best she could. We decided to walk and lightly jog down the rest of the trail back to the car.

As the fear from the day’s events subsided we joked about Colleen’s encounter and decided the best way to unwind would be some beers at the newly opened Sierra Nevada brewery right near Asheville. While out with our hosts Brian and Sarah, we decided that the next day would be a hike/run around Max Patch and a soak in some local hot springs. What I learned is that it would be my first chance to run a portion of the Appalachian Trail.

Saturday started with an early (I say early because everything feels early after four beers) rise and some pastries before heading towards the Tennessee border. After some stress about potentially running out of gas on the steep drive up to Max Patch, we arrived at a parking lot staring at a grassy mountain top. Max Patch is honestly like nothing else. It is a peak that was cleared over a century ago to be used as a pasture that now remains completely grassy. The result is stunning views in literally every direction. Colleen and I took off from the parking lot to log a few miles together heading south on the AT. The immediate thing I realized is that the trail is a lot less rocky in NC than it is in NJ. I can only describe the sections I ran down in North Carolina as perfect – winding, shady single track that felt completed isolated from civilization. Colleen and I turned around about a mile and a half down the trail and summited Max Patch together. I kissed her goodbye and took off on my own (with bear spray) north towards the town of Hot Springs. The only real plan I had for the day was to run North for another hour and fifteen minutes and then return to Max Patch. After an incredible 10K or so, I was greeted with a long climb coming out of Lemon Gap that lead to an extremely overgrown pasture that covered the trail. I decided this was where I would turn around. On a more prepared day, I would have run all the way to Hot Springs and met the group for our afternoon soak, but after how things went the day before it seemed like a bad idea.

After an enjoyable run back to Max Patch I met Colleen and crew lounging in their hammocks. Colleen joined for my final push up Max Patch for the day. What really shocked me was that on the AT’s rolling terrain, I actually covered more elevation than I did on Mount Mitchell.

All I can say about the runs down in NC is that I already want to go back for more.