I tried to write this blog post back in October, my race report for my first DNF at the Bear 100. I didn’t finish it. I didn’t really want to.

One and Half Runners was supposed to be a place for self-reflection. It exists for Colleen and me to catalog our running experiences: good or bad, fun or grueling. Colleen has been amazing at capturing the difficulty of chronic injury and illness and has been open and honest about how difficult it is. I relish every opportunity I get to read one of her posts as it provides an authentic peek into how she is progressing and growing as an athlete.

Then there’s me. One DNF and I went into full-on “woe is me” mode. I didn’t write this post. I didn’t write a report of my successful finish at Javelina. I didn’t write about my plans to run Boston or Miwok in 2018. I just didn’t want to. To be honest, I didn’t really want to think about running and certainly didn’t want to write about running. But now, three months removed from the DNF, the approach feels disingenuous. I didn’t take the time to reflect on my experience or try to grow as a runner. I signed up for Javelina for some closure, but that was obviously a reckless decision. So, time to reflect some and recap a bit to try and grow as a runner.

A bit about the race. The Bear isn’t quite at high altitude, but it certainly has a lot of up and down. Through some pretty remote parts of Utah and just into Idaho (though I never crossed the state line) the Bear was one of the most beautiful races I’ve ever had the privilege of running. I usually geek out about the details of a race, but the Bear has a low key vibe with a barely functional website, so I tried to remain laid back about my approach. The first 20 miles are some of the hardest with a huge climb out of Logan, up Logan peak, and then descending back down to the valley. During the first 10 mile-long descent, I already felt some aches in my quads. Looking back, this was just the first mental slip up. I was absolutely fine, but a bit of doubt slipped in so early into my head that I think the whole day got derailed within those first few hours.

I met up with Colleen at around mile 19 for the first time and told her I was feeling off. But I’m not a quitter, and I certainly wasn’t prepared to DNF a race when I wasn’t injured and was definitely fit. So, I plugged along. The miles just went by so slowly, with so much more effort than I was used to. Sure, at Grindstone it rained so hard I basically got trench foot and I wanted to fall asleep on the side of the trail because of the 6PM start, but that made me feel like a bad ass! The Bear just made me feel weak and ill-prepared. I saw Colleen again at mile 35 and 45, each time looking admittedly worse for wear. 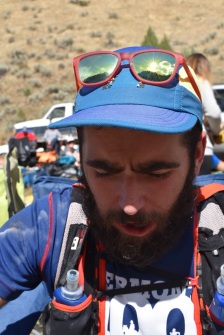 Mile 35, trying to get calories in after a huge descent.

Mile 45, feeling extremely low with the second largest climb of the day waiting.

Leaving mile 50 and starting the second largest climb of the day, I was fortunate enough to run into Jeremy. Jeremy is a bad ass dude from Salt Lake City who has run pretty much every ultra I dream of doing. We chatted for the 8 or so miles between aid stations about why we push ourselves to these extremes, what these races mean, and how fortunate we are to do them. My spirits were lifting and our legs were starting to turn over faster. Finally, I was out of a 50 mile funk and ready to finish this thing! We came into the next aid station and got taken care of by our respective significant others before taking off for another dozen or so miles together. The sun set, and the last few miles of this section began to feel never ending. But I wasn’t alone, and finally I felt like myself.

We got to the aid station and split up to tend to our separate needs. I used the restroom, got more clothes on, and tried to eat a lot. The temperature was dropping fast and I was quickly too cold and had to sit by the fire. Jeremy yelled to me he was taking off and to catch him, but that was the last I saw him. I stayed by the fire trying to warm up, but it never happened. I contemplated dropping here, before even trying to catch Jeremy, but I was still mentally far away from a DNF. I got out of my chair and away from the fire, and took off for a 15 miles on my own.

Out of the aid station I went, immediately starting to shiver. I’m not used to being cold during races, and the extreme chill made me uncomfortable and mad. I had no idea why I was lingering so long in aid stations and why my internal drive was so pathetic. I slowly warmed up on the climb and a long runnable descent had me striding along at a solid clip. I made it to the Logan River aid station (which is not crew accessible) and ate some noodles and waited for some runner to leave with me for the company. Again, if I had just started moving here I probably would have felt so much better, but the cold night left me oddly powerless. When I finally left 10 minutes or so later, I was greeted with a wide river crossing. I fell, submerging my gloves in the freezing water. Out the other side, my body was shaking rather violently as I power hiked desperately to warm up.

My race was over. I was cold and my gait was getting funky with the fatigue. The terrain was getting more technical, not easier as I had anticipated. I just wanted to stop. The next 7 miles from Logan river to where I would drop at mile 75 were extremely hard. I thought about how selfish I was for making Colleen crew for me for 30 hours in remote Utah, alone. I thought about how much money I had spent to get to the race, and how quitting seemed so wasteful. The race was going to be my qualifier for Western States and Hardrock – now what? The pity party raged on for about 2 hours, and when I death marched into the Beaver Mountain Lodge, my decision was made to quit.

Colleen did an amazing job trying to get me back out the door without seeming pushy. Apparently Jeremy was only 15 or so minutes ahead of me, which honestly deflated me even further for my decisions to wait so long at the aid stations. Jeremy went on to finish in 26 or so hours, and I’ve frequently said how if I had stayed with him I’d have a belt buckle for the Bear 100. But that’s a weak excuse and I don’t think I could’ve made it the last 25 miles in 6 hours. I do wish I had company, either Jeremy or a pacer, to drag me that last quarter. I know physically I could’ve done it, but the Bear broke me down and made me accept my first DNF.

I left the aid station and cried in the car. I cried the next morning at the AirBNB. I probably cried a few other times. Colleen was now in grief counselor mode as I tried to reconcile what had happened. Honestly, I thought I would slowly turn into the 50 year old ultrarunner without a single DNF on his ultrasignup account. And if I did have a DNF, the story behind it would be worth telling! But no, at the Bear I simply was worn down, beat up, and could not bring myself to finish. I’ve replayed the race in my head to many times. I think about the end result pretty much daily.

A month later I went on to have a successful race at Javelina. Obviously motivation was high, but I did it alone, without the pressure of making Colleen sit idly for hours or wiping snot from my mustache. And that is a good summary for how I feel about the whole thing. Mentally, I think my race at the Bear is the logical conclusion of 3 years of break-neck ultrarunning. I spent 2015-2017 going to whatever race I wanted, pushing hard, and finishing by any means necessary. In Utah, I couldn’t. Physically, I think I was fine and fit to finish. But mentally, I was at the end of my rope. At the end, I was exhausted by the high benchmark I had set for myself. The march to mile 75 to drop, all I had was feeling selfish for the sacrifices myself and others had made to help me get there.

But what I’m left with is a greater appreciation for being a part of this wonderful sport. I’ve been so lucky to travel the country and meet so many amazing people. I feel like a trail runner, and one that’s excited for all the adventures to come. It feels much less like a need to prove myself and more an opportunity to experience magnificent places and push my boundaries.

A note from the Half Runner:

Matt loves to think I get bored and hate crewing for 30 hours, but I honestly had the most wonderful time crewing solo at this race. Matt got me some fun camera toys for my birthday, so I spent the day enjoying the weather, taking photos, reading books, and making friends with all the other spouses/significant others there supporting their crazy runners. And met a cute puppy! Stay tuned for my recap of Utah, in photo form!