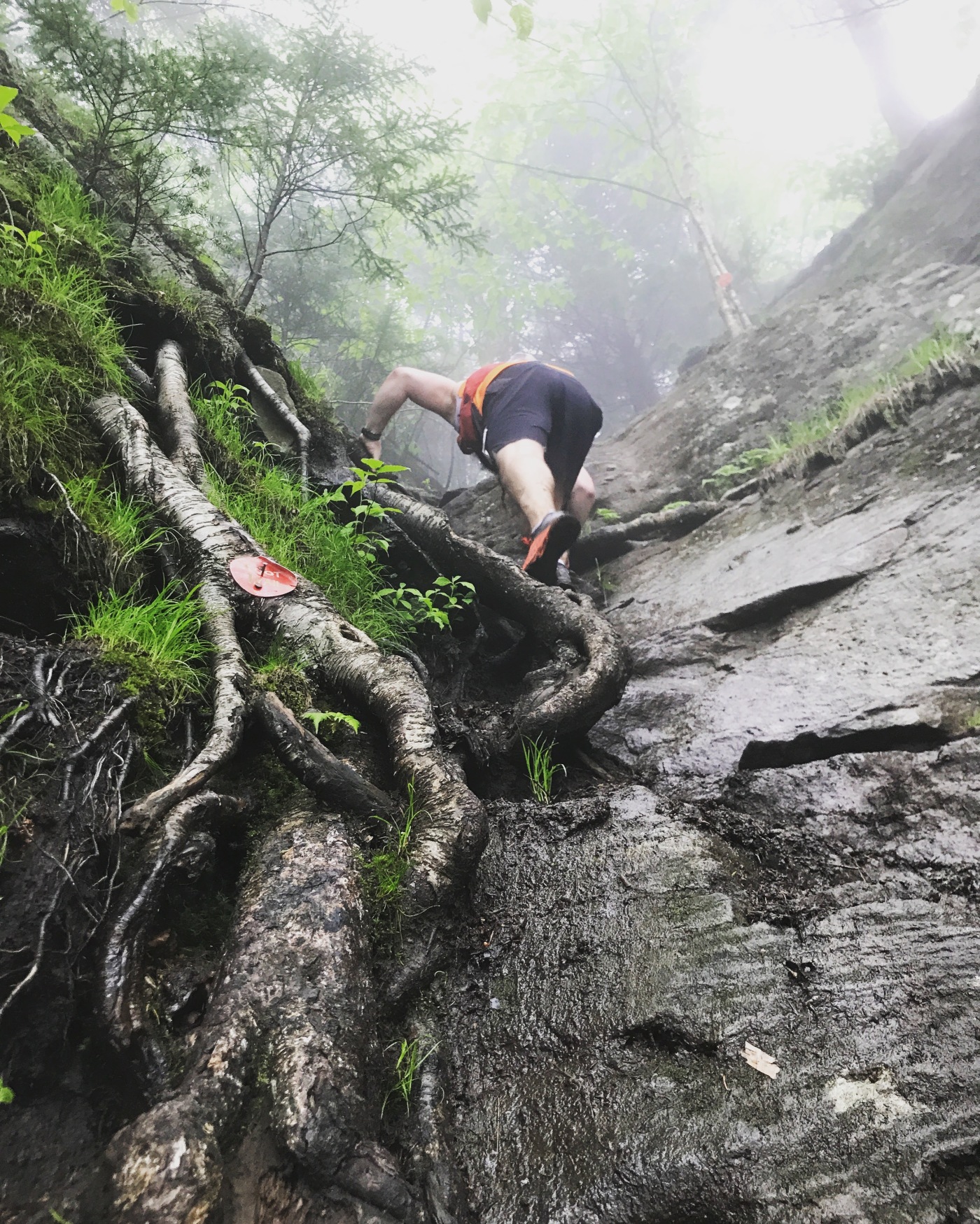 Ultra runners are fueled by testing their limits. Nothing about the sport is easy or even sane, but the pursuit of pushing our bodies to their absolute limits drives us forward. As we attempt new races, run different trails, and ramp up our training, our limits stretch further and further. We get new benchmarks to evaluate ourselves. PRs and previous times become our foundation as a runner. Your Ultrasignup results page grows and becomes a public record of your race days, good and bad. This quest to push beyond one’s limits can become a bit all-consuming, at least for me, as new races pop up or instagram photos of faraway trails fill social media. Past successes become fuel for attempting the next insane event. But as we reach for the next distance or race with double the elevation gain, it can become difficult to measure if we are actually still improving. That’s why pacing Mike at Manitou’s Revenge was so fun for me. The race wasn’t about the next great event (although I am not sure you can top what Manitou’s got to offer), but rather a return to prove oneself against one of the most brutal events out there.

To be transparent, I had never met Mike before Manitou’s. We “met” over twitter as I saw him cast the net for pacers at this year’s event. I took the bait and said why not, I’ll pace a stranger for several hours of running. We chatted over email and social media, but right away it was clear that Mike had ambitions for this year’s event. He had finished Manitou’s in 2016, being the last finisher in around 23.5 hours. He was coming back for revenge. Or at least I deemed it to be revenge. Coming in as a pacer, it was perfect. Mike’s goal would give me clear direction for the day and getting Mike to his finish.

I was picking Mike up at the 5th aid station of the race, Platte Cove. The drive up to the aid station was a perfect introduction to what the day would hold. Dense fog and a winding road greeted me and Colleen in the Catskills. Conditions were wet and the course would be slick. We got settled and waited for Mike to roll in.

Meeting Mike at the aid station was a lot like how I imagine online dating would work, but if one of the participants had just run 30 miles and had 24 miles to run. Mike wasn’t exactly on time, and came rolling in looking a tad disheveled. It quickly turned into crew/pacing duties as I grabbed his drop bag and worked to get any food and gear he needed. Compared to the runners just prior to him, Mike was in and out of the aid station. He was a bit behind on time, but in good spirits and raced the first 30 miles extremely smart. That made my job much easier.

Mike meeting Colleen and me at Platte Cove 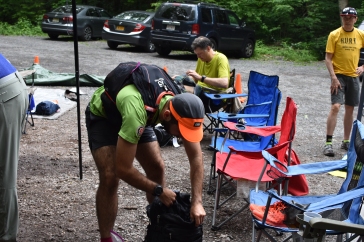 Now, Manitou’s doesn’t cut you any breaks. The first 30 miles suck (so I hear). The last 24 miles also suck (so I know). It’s a 54 miler that runs like a hundred. So, leaving the aid station, I knew we had 7.5 miles to the Mink Hollow aid station, but the volunteers at Platte Cove assured me the next 7.5 run more like 12. Having now completed it, I’d say that’s accurate. This next session is when the course hops on the Devil’s Path, which happens to be very aptly named. The “trail” takes no prisoners, consisting of unrelenting climbs requiring you to use your hands and descents that range from sketchy to I-should’ve-written-my-will before-offering-to-pace-this-race. In all seriousness, some of the down climbing sections were more serious than going up.

Over the 7.5 miles, there are three peaks – Indian Head, Twin, and Sugarloaf. With no section really allowing for sustained running, Mike and I chipped away the course over the slick rocks and gnarly elevation profile. During this section, we’d pick up Paul, who would manage to snap 2 trekking poles on the Devil’s path, and Jodi. We ran into Jodi right before Mink Hollow who was convinced she was going to drop. The course was treacherous and no ultra was worth killing yourself, so it seemed like the logical decision. Mike and Paul assured her that the worst was over and right there and then we formed a pack that would stick together for the remaining 16.5 miles.

At Mink Hollow, the crew recomposed themselves and geared up for the crushing climb up Plateau. Mike was 30 minutes ahead of where we was this time last year. “Perfect,” I thought, “we are gonna get him a PR at this rate”. The last climb on the Devil’s Path is another ass-kicker of steep, sketchy climbing. Once we topped out, the trail smooths before a turn down of the peak following a side trail. By this time, it was dark. While it was still a few minutes until sunset, the dense canopy and fog made running without a headlamp a no-go. The four of us did our best to navigate the admittedly smoother trail, but thick fog and slick rocks made running uncomfortable. I was hoping to start putting the pressure on the group at this point, but part of being a good pacer is knowing your place. We were moving incredibly strong and steady, so we ran smooth sections and walked quickly through the rest to Silver Hollow Notch.

By Silver Hollow, we were close to 45 minutes ahead of Mike’s arrival last year! The runners took time here to take in a substantial amount of calories. Manitou’s starts absurdly early if you factor in the bus ride from the finish up to Windham. At this point, everyone was pushing close to 24 hours awake, so just staying positive at this point is a huge success. As we focused for the remaining miles, the biggest moth I’ve ever seen tried to fly away with one of the aid station volunteers before landing on the pop-up tent. Thoroughly disturbed by the thing, I gently urged the runners to get going so I’d be able to avoid getting hit by it. We got moving up the climb from Silver Hollow, which tops out before running a slightly off-camber downhill to a creek. We made really good time down this stretch, and we all enjoyed the cold water on our feet in the humidity. Mike took a minute to douse himself in cold water before we started the final climb of the course.

The climb up to the Willow aid station is pretty damn rough. I’d say if it were 30 miles earlier on the course, it’d be runnable. But after 48 or so miles, it is unrelenting. We marched up the slope, appreciating that finally the trail makers used switch backs but still annoyed with the trail’s persistence. In the final half mile of the climb, Jodi pulled ahead to take a bit more time at the aid station while Paul, Mike, and I took our time to not overexert. Finally, we reached Willow towards the top of the hill! The aid station was stocked with hot food and plenty of snacks, which was super impressive considering it was a 2 mile hike in to the aid station. The volunteers were super friendly and joked with Mike about his later appearance a year prior. At this point, we were an hour and half ahead of Mike’s previous time and energy levels were much higher.

The crew took off from willow for the final 500 feet of climbing to the fire tower. The fog got really thick here and I really struggled as a pacer keeping the group on course. I did my best to keep a bit ahead to identify the next blaze and keep the crew moving along. Suddenly, there was a huge fire tower right next to us! The climbing was done! All downhill from here! But of course, Manitou would not let us off easily. 3 miles of downhill covered in football sized rocks that teetered, rolled, and rocked as we tread down them. We kept a strong hiking pace down, not risking a busted bone or face on the slick and unstable rocks. The group decided to finish together, and having spent 6 or so hours together at this point it seemed fitting. We finally bottomed out and made our way down the last mile of road.

In the final mile, we all expressed our gratitude of having such great company for so long. Mike thanked me for pacing him on a whim and I told him not to mention it, for I had a blast and there isn’t too much better than sharing some trail miles with good company. Finishing and reflecting on the day, I’m left wondering how I am as a pacer. I got Mike to the finish and 2 runners tagged along. But did I push hard enough? Did I say the right things? Had I been too cutting with some of my jokes and jabs? Even though I have my self-doubts, the experience to me speaks more about each own’s limits. Mike PRed on the course by 2 hours. A demonstrable improvement from last year. He pushed hard and dug deep. Viewing as an outsider, he encapsulated one of the things I love so much about ultra running: the need to push our limits.