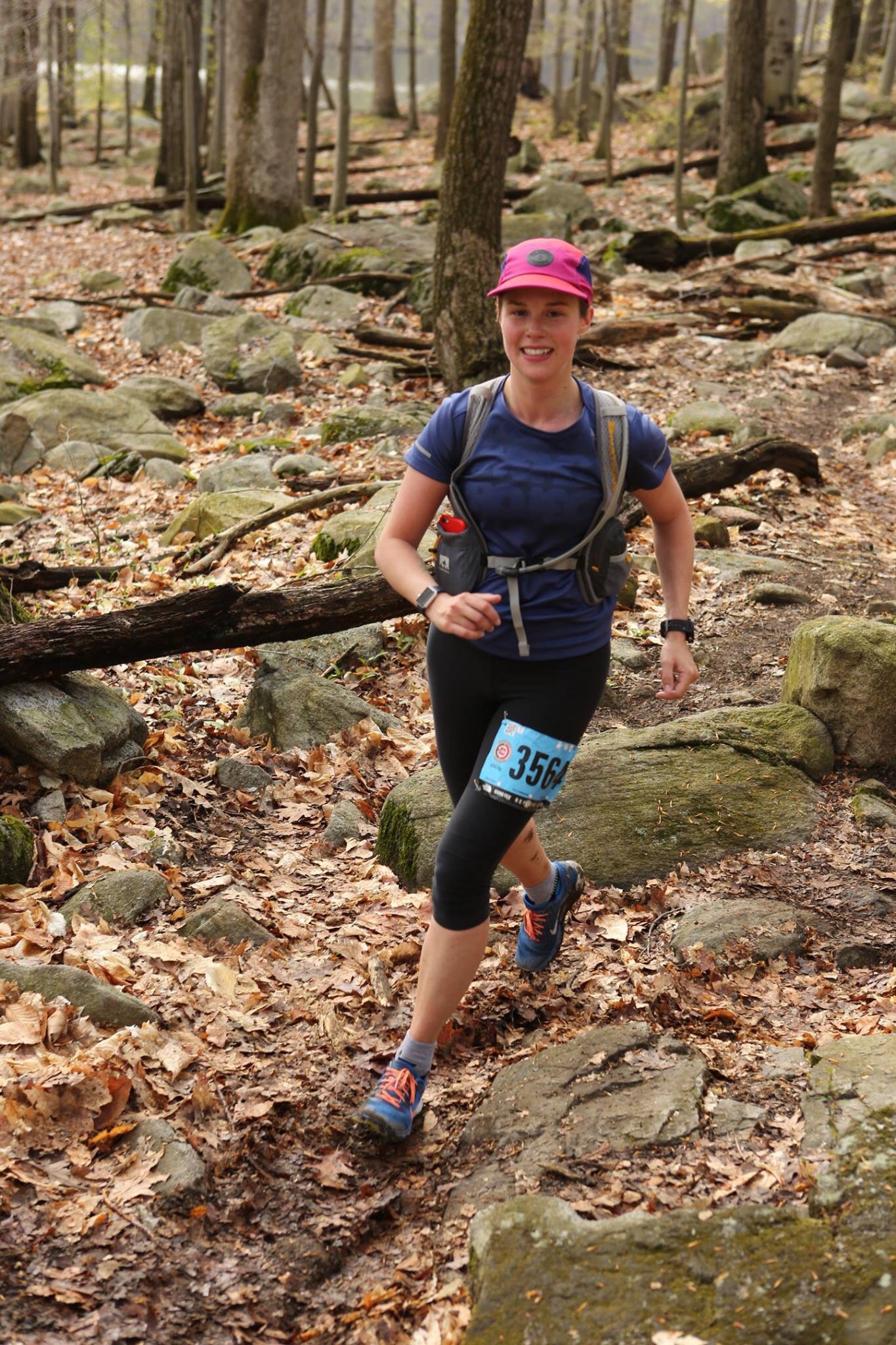 Well, Matt may have done basically the same course with an extra 20 miles thrown on, but we had very different race day experiences! While I was on the struggle bus my fair share of the race, it was overall an amazing day and I felt strong & fast almost the entire time. While Matt is good at remembering where he was and how he was feeling at what mile, I have a more generalized recap since I could hardly focus on anything but keeping my body feeling good.

To start the day, we had a 2:45AM wake up, since Matt started 2 hours earlier than me. I was grumpy about losing sleep, but I’m grateful I got to see Matt off before his long day of racing. After his 5:00am start time, I had nothing to do but stand around eating donuts around a fire pit to kill time. I felt anxious to just start, but I met a bunch of amazing runners while waiting for the start! When it was about 6:40 I finally stripped down to my race day gear and checked my bag. I was ready to go, and felt more excited than nervous for the first time in a while.

We started at 7:00am, and by that point it felt like noon. I remember being a few miles in and thinking “wow I should have had lunch” and then realizing it was literally 7:30 in the morning. I had a long day ahead of me. A runner I met before the race had warned me that the first half of the race was much harder than the second half, and that he was begging for mercy by mile 5 last year. By the time I hit mile 5, I was feeling great and had no idea what this guy was talking about. It was hilly and technical, but nothing I couldn’t handle. Then mile 5 was literally just one big hill. My legs were already tired, the toe I had fixed last week had been bothering me for a few miles, and panic set in. Had I not prepared well enough? Should I have trained harder? Of course, it was too little too late, and I tried to push the negative thoughts from my head and focus on one mile at a time.

At mile 7, I was sure I was slowing down. I had a chart with me showing what my timing should be at each aid station, and even at mile 8 I was on course for a 6:30 50k. My goal had been between 7-8 hours – I wasn’t going for speed, as I knew it was going to be a really challenging course. So I adjusted my pace to actually slow down and reminded myself to take it easy – I still had a lot of miles left and didn’t want to burn out early. Around mile 11, some nausea hit me. I had waves of feeling awful and waves of feeling fine for probably 6 miles. I was hurting and had to dig deep to push through. Luckily I brought my headphones, so I threw them on and tried to focus on some upbeat music to get me through it.

At each aid station I knew I needed to get real food in me, but I was really struggling. I’d walk away with a pb&j sandwich in hand ready to hike and eat, and would take 10 minutes to just choke it down. I was struggling between wondering if I needed more water, or if I was over-hydrating. Finally, I had my last wave of nausea and was feeling good again. I was so relieved to feel good, I was pretty much dancing through the woods (as well as you can when there are giant rocks and fallen trees everywhere).

The terrain was brutal. There were parts where I was lifting myself up in between giant boulders with my arms, and parts where I was basically crawling down a steep hill covered in rocks. I was not prepared for the amount of rocks. Seriously guys, it was rocky. When it wasn’t super rocky, it was gorgeous. We had some unreal views, though it was hard to find them while trying not to trip. I did take one fall and slammed my knee into a fallen tree – luckily I basically just tuck-and-rolled out of it and had a solid mile of flat, easy trail after that to recover and shake it off. Most of the miles after the nausea passed have already slipped my memory. I just remember putting one foot in front of the other, drinking a little water every mile, and chatting with as many runners on the way as I could.

At mile 21, I was feeling good but HOT. I hadn’t realized what 65 would feel like, and the clouds had started to disappear. I ran with a man from Costa Rica complaining he was cold (while wearing gloves and a long sleeve shirt) and wished that feeling upon myself with all my might. At the Anthony Wayne aid station (mile 21.2) I stopped to throw water on myself and put some ice in my hydration pack. It was glorious and helped put a spring back into my step. The next few miles were slower and hilly, but once I hit that marathon distance and kept going, I felt unstoppable. Nothing makes you feel more badass than finishing a marathon… And then continuing to run.

I knew the dreaded Timp Pass was somewhere after 26, so I put on some T Swift and just cheered on everyone around me so I could try to keep some positive energy going. I hadn’t looked at the elevation of the last big climb (on purpose – no use dreading an unavoidable climb) but I knew it was going to be brutal. Once I saw it I stopped, rolled my eyes, and just told myself I was the idiot who paid for this torture. My legs were hurting from all the hills, my feet were hurting from the rocks, and my knee was a little sore from my fall. I knew I had to put it behind me and think happy thoughts, so I put on Shake it Off (twice in a row) and literally danced and lip synced my way up the hill. I’m 100% sure I looked like an idiot, but I’ll be damned if it wasn’t exactly what I needed. I absolutely dominated the hill and was ready to FINISH. I didn’t want to let any negative thoughts slow me down or make my doubt myself.

One of my favorite moments was probably around mile 28 – right before the last aid station. I had my tunes going and T Swift starts singing “are we out of the woods yet?” and I literally said out loud “NO TAYLOR I AM NOT OUT OF THE WOODS YET, THANKS FOR THE REMINDER.” Sorry if you were around me during this race – I promise I’m not crazy. Well, no crazier than anyone else who runs 31 miles at a time.

I pushed myself as hard as I could those last few miles. I had been leapfrogging with a few guys during the race (I was mostly surrounded by guys during the race – come on ladies, let’s outnumber the men someday soon okay?) and at mile 29 I finally ran with one of the guys for a bit and we bitched about how we just wanted to be done. He ended up finishing just before me, but I didn’t care. I got to that finish area and was greeted by the November Project Boston leaders and nearly lost my mind. For some reason, I thought the marathon relay was Sunday, so I was not prepared to see so many familiar, smiling faces cheering me on. I had the biggest smile on my face and finished feeling like a million bucks. There were dozens of NPers cheering for me, giving me high fives, and hugging me after I finished. I can’t thank them enough for being there for me – it was hard not having Matt at the start or finish for my biggest race, and seeing those beautiful human beings made my whole day.

I felt great post-race for about 15 minutes and then the nausea hit me. I knew it would (or at least I had a suspicion since I felt nauseous after Vermont as well, which I also had bouts of nausea during) but seeing Matt finish his 50 miler perked me right back up. I shoved as much food as humanly possible into my tired body and soaked my legs in an ice bath.

I finished my race in 6:50:26, which was a hell of a lot better than I could have ever imagined when I was contemplating throwing up at mile 12. I had my fair share of ups and downs, but the ups far outweighed the downs. Overall, I definitely recommend runners who enjoy technical running to do this course. It was truly a challenge of endurance, and I can’t wait to head back next year and do the relay – or, depending on this next year of running, to PR the 50k!