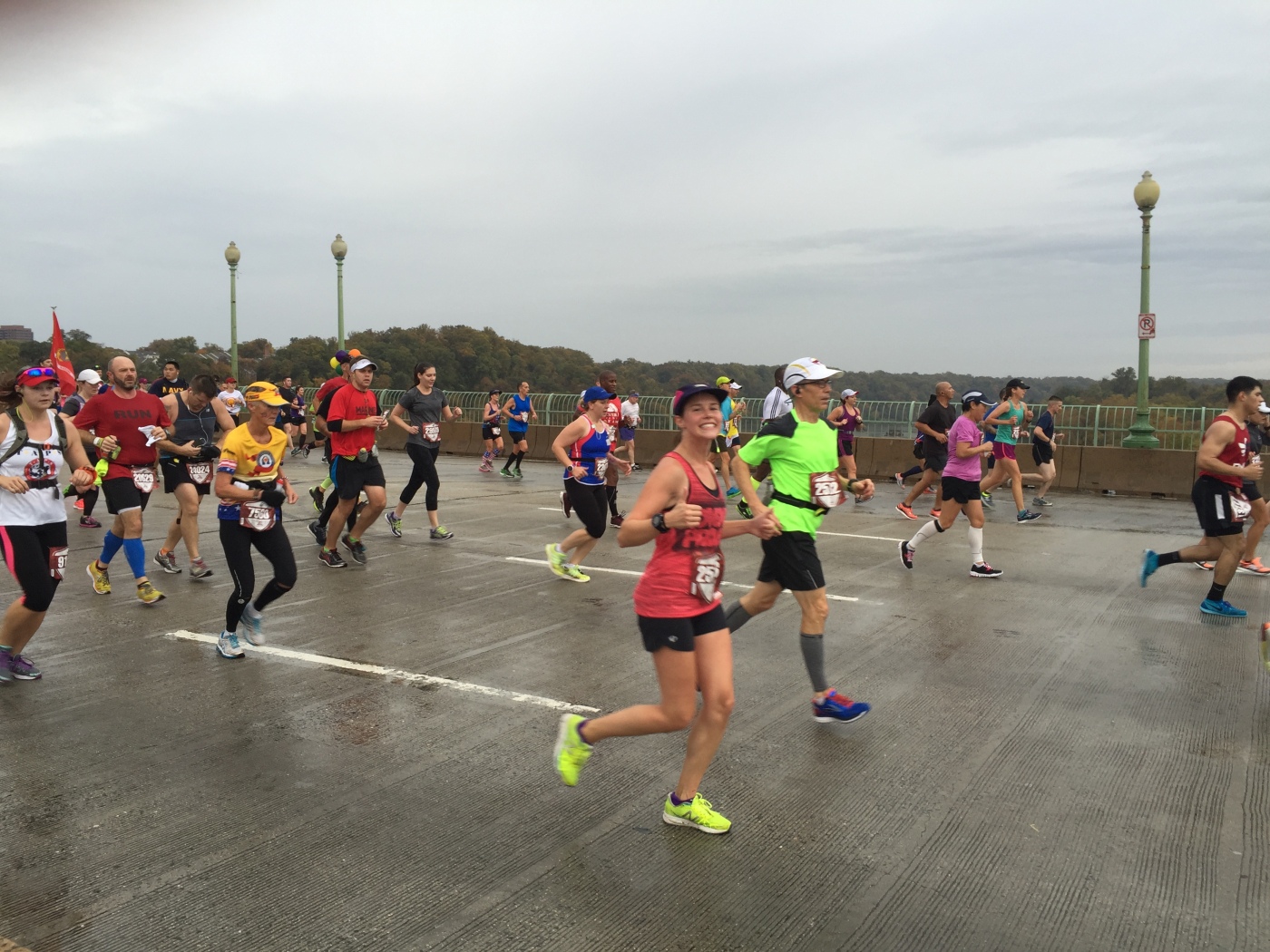 I ran the 40th Marine Corps Marathon last weekend, and boy was it an amazing experience! I’m glad that I not only had a successful race in terms of time, but I felt pretty good almost the entire race. It was an incredible race, all the way from the (painfully long) security line to the celebration at the finish.

On race day, I woke up way too early, because I’m overly paranoid about oversleeping ever since Matt overslept for his first half and had to run to the start to make it on time! I fiddled nervously with the coffee maker in our hotel (why the hell are the individual-sized coffee bags so giant at Westin hotels?! I had to read the instructions like 5 times before I was confident I was doing it right) and went down to the Starbucks to grab a banana and croissant. When I was heading to Starbucks, I saw a ton of runners heading to the race already and thus commenced my mini-panick attack. Matt was still asleep and I hadn’t eaten and I WAS GONNA BE LATE AND MISS THE WHOLE RACE OMG THIS IS MY WORST NIGHTMARE!

Then Matt woke up and I felt better. He would know when I should leave – he’s done enough marathons to know the drill. Turns out, there was a HUGE line for security so I’m lucky we left when we did and that I didn’t bring a bag to the race – a lot of runners actually missed the start! I know races ALWAYS say to get there like 2 hours early, but come on man. That’s my one complaint about the race – I wish they had made it extremely clear that security was going to take a long time so getting there early was actually important. There’s nothing worse than getting to a race 2 hours early to stand around freezing in the rain for no reason, but I don’t mind standing around freezing if it’s for a good reason!

I met a few amazing people while being herded in to the security area. It always amazes me how many genuinely kind people are into running marathons. I met a woman who had just had surgery on her wrist not 4 days before (totally insane – hope she finished and her hand didn’t fall off…) and a man who hadn’t run a marathon for 12 years giving it another go. His advice to a young runner? Don’t stop running, or you’ll regret it. I didn’t have the heart to tell him how my body was practically falling apart so I should probably take some time off after this race!

Once the race started, I was pumped up and ready to go. I was in the zone – my mind was  empty and I was just enjoying the rain on my face and focusing only on looking for Matt in the crowd. The beginning was the hillier part of the race, but I was thankful for that. I was excited, adrenaline was pumping, and I was focusing on keeping my pace steady despite the hills. With my knee injury, I knew that if I eased up in the beginning I would regret it later if it started acting up. Of course it’s not the smartest idea to go into a race pushing a bit more than I wanted to, but after my knee hurt during the B.A.A Half, I knew it wasn’t going to be easy by the end of this marathon. I’ve never been more grateful I made that decision, and I was 100% right in my prediction of the end of the race being painful.

Matt was the world’s best spectator and crew. He probably ran a half marathon trying to run around DC to snap pictures of me and cheer me on. The look on his face every time we finally saw each other was pure joy. I’ve never been so proud of myself or happy to have such an amazing guy as my support system and best friend. Yeah, that was mushy gushy – don’t care, get over it! The first half went extremely well, given that it was rainy and I was terribly worried I was underprepared.

Around mile 14, I started having a hard time breathing. Not so much that my breathing was laborer like when you run too fast, but like my chest was just restricting and my lungs just couldn’t fill up. This wasn’t a new sensation for me, but usually it happens at the end of a race when I’m overwhelmed with emotions. Maybe I was just overwhelmed – it was a huge crowd and there were so many runners, maybe it was just overwhelming how excited I was to be there. Nevertheless, I was having a hard time breathing, so I popped my headphones in and tried to focus on Tame Impala’s badass new album, Currents (yes, the same album that got me through the last few miles of my 50k. Damn you Kevin Parker for making the world’s best album) and took deep breaths.

I had some twinges in my knee right around then, so I took some Advil to stay on top of it. I pushed through it and tried to focus on the good – I was only a few miles away from where I hit the wall at Vermont so I had to focus on getting enough food and water in to avoid nutritional problems. At mile 19, I was so looking forward to seeing the November Project group and getting a much needed pick-me-up. I was not disappointed! Those NPers sure do know how to cheer! I was feeling good and ready to push through those last 6 miles.

By the time I got to the bridge (around mile 23,) I was tired and my knee was really starting to hurt. I knew I only had 5k to go, but that might as well have been another marathon. This was definitely the wall, but to be honest it was less “hitting” the wall and more like “gently bumping into” the wall. I wasn’t nearly as defeated as I had been at Vermont (which made sense since I had been in a boot for the month leading up to Vermont) and I focused on that positive thought to get me through the rest of the race. I walked for a minute or two, and searched desperately for some water to take some more Advil. I found a little spot handing out some cups and was so excited. Turns out, it was beer! So I chugged that Dixie cup full of beer, along with my Advil, and I’ll be damned if that wasn’t exactly what I needed.

The last mile of the marathon felt like the longest mile of my life. My knee was really hurting and it took all my energy to focus on just running – the quicker I ran, the quicker I would be done torturing myself. Matt saw me right before the end and was not impressed with my face – all the other times I saw him I was smiling and positive, but I saw a giant hill leading up to the finish and thought I was going to need someone to roll me up it. I ended up walking up that last hill, because hills were especially painful for my knee. I saw the end and pushed myself to run it in and was so proud of myself. My watch had been a little wonky for a few miles in the middle, so I had no idea how my splits were, but I focused on simply being proud of myself for finishing and for setting a new PR of 4:24:16 despite my injuries during my training!

The day after, I checked my splits on the website and I was absolutely blown away. I kept it extremely consistent despite my watch and knee problems, and only slowed down at the end (which was obviously going to happen, since it was only my second marathon and I was injured). 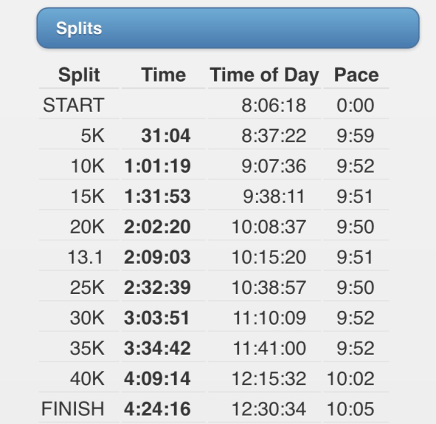 I can’t wait to give it another go someday, when my body has recovered. My left knee is still very, very sore (and it doesn’t help I’m losing a toenail on my right foot!) so for now my focus is going to be recovery, strengthening, and possibly working with a running coach to figure out what is going on with my form/training plans to cause so many issues. It’s amazing that since May I have now run 2 marathons, 1 ultra marathon, and an ultra Ragnar relay as well. I’ve got a lot to be proud of from this running season, and I’m excited to see what happens in the summer when I can hopefully be comfortable enough with my training and recovery to race again! The goal? 4:15:00 marathon.

In the meantime, I promise to write more blog posts despite the lack of races. We also apologize for falling off the blogosphere for a while – things have been quite busy in the GrandElam household! Lots of traveling, lots of late nights at work for Matt, and I’ve been transitioning to a new job. We are also on the hunt for a furry running buddy to join our family, so be ready for our blog to have a disgusting amount of puppy pictures in the next few months once we meet the perfect pup!